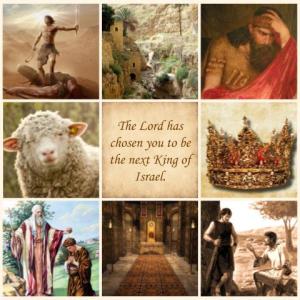 As the youngest of seven brothers, David will never amount to more than a bad poet, a decent shepherd, and a talented harpist—until the High Priest anoints him to be the next King of Israel. Israel needs a strong ruler now that King Saul has succumbed to madness, and the Priest seems to think David will do the job. He just leaves before explaining just how a shepherd is supposed to take the throne.

Prince Jonathan struggles to keep his father’s attacks under wraps. Saul sees enemies everywhere, including the eyes of his only heir. Attempting to bring back his father’s sanity, Jonathan calls out for musicians to play for the King to soothe his troubled mind. Only David of Bethlehem is able to calm Saul’s episodes.

David knows that Saul’s reign must come to an end, while Jonathan still hopes his father will return to normal. After David kills a giant and people start singing his praises, the King fears that regicide isn’t far behind. Saul chucks a spear at David’s head, and David has to flee for his life while Jonathan tries to keep both his father and the Kingdom alive.

Though Sarah is not pursuing publication with any of these, she believes in learning from the past and in sharing those experiences. These novels were the stepping stones along her writer’s journey.